The end of year Tournament of Champions (“TOC”) is the most anticipated event of the MN Bass Tour season due to it being the only 2 day event of the year and as a result, factors heavily in crowning the Blackfish Team of the Year.

Specifically, teams attending the weekend event accumulate Team of the Year points for BOTH days. The end result: an exciting finish as teams charge towards the coveted honor by patterning an outstate body of water.

This year was no different on Gull Lake and the Tournament of Champions presented by Blackfish Gear.

The tale of two days and differing weather patterns. For Day 1, While the Twin Cities area basked in a return to summer, humidity, and 90 degree temperatures, anglers enjoyed a 70 degree air temp and fog that did not lift until 12:30pm. You read the right. Anglers found many 2 pound fish willing to bite but it was Rob Bolke and Nate Whithed of Flippin’ Ain’t Easy who found 18.30 lbs of largemouth to take their lead over the field. They anchored their catch a 5.25 lb beast getting them the Blackfish Gear Big Bass for that day.

Overnight the region saw explosive thunderstorms which changed up the bite for Day 2. Minnesota Bass Tour members were met with typical post-frontal conditions: sunny, clear, and a 10-15 mph wind that crept up from the south. 30 mph gusts were blowing too and let’s just say the bite changed.

Flippin’ Ain’t Easy went back to their day 1 area and were able to take advantage of the “calmer” morning before being blown off. Their risk paid off as they found themselves sitting with 17.30 lbs and totaled 35.65 lbs for the weekend! Boy, these guys laser in on these end of year waters, notably winning the TOC last year on Lake Vermilion as well.

The Blackfish Gear Big Bass of Day 2 went to Gotta Have More Cowbell, Jesse Larson, Rocky Novak. These guys have kept their heads up this year and were rewarded with a 5.35 lb donkey and the highly sought after big bass belt to cuddle up with over the long winter. Great way to bookend the year.

Last Cast Claims the Team of the Year!

Since they joined the Minnesota Bass Tour in 2013, Paul Hecht and Mark Wessel of Last Cast have always been a team to keep a watch on, regularly having the bass tour’s camera crew following them for the live on-the-water updates. Here’s their past finishes in team of the year points:

Do you think these guys were due?

As has been over the past 6 season, these top guns have been the model of consistency. This year they only placed in the top 3 of any regular season tournament once. ONCE. And that was on Lake Minnetonka when they took first place. The rest of the year they finished no less than 6th place and similarly were in the top of the field on both of the TOC days (3rd largest bags on both Days 1 and 2)!

By being consistent and sticking to their strengths all season long, Mark and Paul win the Blackfish Team of the Year and are awarded Blackfish Gear Rain Suits, their choice of Quantum Fishing reels, Team of the Year cash, and their names on the team trophy – etching their name in Minnesota Bass Tour history!

Congrats to these guys on a stellar year!

The remaining award given out was the inaugural Quantum Fishing Big Bass of the Year Award, rewarding the team with their choice of Quantum Reels.  The Bassassins took the honors by bringing in a 5.80 lbs largemouth July 29th on the Mississippi River tournament!  Jim and Dan were throwing (also MN Bass Tour gold sponsor) Spro Bronze Eye Frogs in the slop to carry the season in this category. Congrats boyz and thank you to Platinum sponsor Quantum Fishing for their generous sponsorship throughout the 2018 season.

It’s hard to believe we have wrapped up another season here from Minnesota Bass Tour headquarters! A more formal write-up will be coming in a separate blog post to highlight the great stuff from this year! 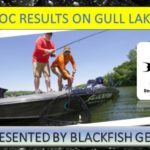 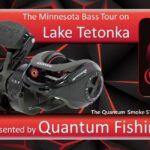