Calm Before the Storm

For the third time since our inception in 2011, the Minnesota Bass Tour visited North and South Center Lakes. Today’s tournament was presented by tour Platinum sponsor Onyx Outdoors, whose recreational products provide reliable, dependable and trustworthy gear to keep you outdoors longer and on your terms.

Anglers were greeted with a beautiful sunrise, *ahem* some pontoon riders, and the pre-frontal conditions that typically makes for some memorable days on the water!

As serene as the pre-launch looks above, eventually the placid conditions were interrupted by a massive and dangerous thunderstorm that sent anglers to seek shoreline protection . Despite the adversity around this storm’s lightning and rain, many Tour Members still wrangled in multiple 4 and 5 pound bass, and even one larger!

Team of the Year Race Heating Up!

Throughout the first 3 events we’ve seen different finishers take the top event prizes which makes reporting out the Team of the Year leaders a fun exercise. In retrospect, I think some of the enjoyment is simply because it reflects the parity in our Tour but also how we continue to get better through knowledge sharing and camaraderie.

And with that parity, it makes it even more impressive that we had our first repeat winner for the 2019 season and yes, catapulting them back to the top in the Team of the Year rankings!

Dan Cochran and Billy Linaugh of Team Roboworm have been on a little tear in the Minnesota Bass Tour over the past couple seasons. Last year they spent most of 2018 near the top of the Team of the Year race only to see it go in an instant at the TOC.

After a long winter licking those wounds, these guys made it a priority to – as Billie put it – “to make things right.” For the first event on Lake Tetonka Billy and brother-in-law Dan kept their word. Coming back to childhood waters of North and South Center, they knew they could keep their momentum. Together, these guys ripped up schools of largemouth by cranking them up – 19.35 lbs – easily besting the 2nd place team by over 3 pounds!

Besides the cash payout, these guys get their choice of Quantum reels for taking first place. Just as important, they took a 5 point lead in the team of the year race all the while keeping Billy’s mantra of “making it right.” Nice work boyz, I’m gonna try to stay out of your way!

Despite the dramatic change in weather, there were still very respectable bags brought to the scales. Following up Team Roboworm in 2nd place was team Bag’em and Tag’em of Aaron Schmoldt and Rob Bolke. (If this duo sounds familiar, you probably recall them as team name of Flippin’ Ain’t Easy. Rob was visiting and subbed in for Ron Schmoldt.) These guys sacked 16.15 pounds of North Center bass to claim a cash prize and two Onyx A/M-24 life jackets, courtesy of platinum sponsor Onyx Outdoor

In 3rd place, we got to see a new team come to the winner’s circle: Mike Raetz and Mike Davis of Bass Lives Matter. Always top notch competitors, these guys caught 15.90 pounds by working docks and slop to take home cash and All-Terrain Tackle gift cards. Without a doubt, these guys will be ones to watch as we close out the season on Waconia and Cass Lake!

The last tournament on Washington had a father-son team take big bass honors (Bag’em & Tag’em) and this tourney had it happened again. Jared and Jaxon Tidd of The Money Shots brought in a 6.00 pound largemouth that bit them near a dock on a senko. Jared had no idea that the panfish-like bite he experienced prior to setting the hook on this tanker would result in a top 5 big-bass largemouth for the Minnesota Bass Tour, $100 cash AND $120 in Blackfish Bucks! See more at the BlackfishgGear.com and their Facebook page!

Team Roboworm “made things right” on the big bass front too, getting the second largest one of the day to buoy their winning bag. The 5.20 pound hawg also resulted in some cash and an FVP fuel and wash package from platinum sponsor FVP Parts.

See the complete results by clicking on the link above

Thank you to our platinum sponsor Onyx Outdoors for presenting the North and South Center tournament and their ongoing support of the Minnesota Bass Tour!

We are quickly coming to the last events of the Minnesota Bass Tour season and despite Roboworm’s position in the team of the year rankings, anything can still happen! We are going back to familiar waters of Lake Waconia in 2 weeks where we have seen some of the biggest bags in our storied history. Stay tuned to see how that plays out for your favorite teams! 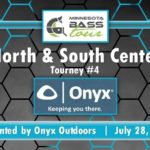 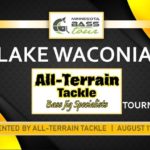