A common phrase uttered by anglers, “this area looks bassy” was heard throughout pre-fishing and on the day of the tournament held on the Mississippi River sponsored by SPRO.

The 4th tournament of the year held on July 29th would award the winners over $100 in Spro tackle, some of which were the topwater frog baits that are ever so popular on this stretch of the river. The presentation uniquely hung on a hockey stick…

The day immediately before the tournament, the FLW Collegiate Bass Tournament was held where 82 boats battled it out. To say the bite was tough for MN Bass Tour anglers was an understatement from that and all the related pre-fishing pressure that preceded it. Anglers throughout the two days remarked on the low numbers of bites however finding so many areas that “looked bassy”; whether it was in the backwater sloughs mixed with tantalizing largemouth bass cover or unique current cuts to trick the smallies into biting, there was no shortage of “areas that look bassy.”

Thus, anglers were faced with a challenging bite that was anticipated while trying to find the right bites of 14″ plus fish to bring to the scales.

Not all teams were tricked by the pressured waters conditions. Team Flippin’ Ain’t Easy’s Rob Bolke and Aaron Schmoldt swayed away from all the high traffic backwaters and instead targeted smallmouth off tributary points and wing dams. These guys were able to see fish sitting in the lower portion of the slow current and use jigs and drop shots to nab 15.00 lbs. As the 2017 reigning Team of the Year, these guys just thrusted themselves back into the title race for 2018!

In 2nd place, Team Shake N’ Bake of Lucas Matzke and Brian Lindberg (subbing for Derek Born) brought in 14.85 lbs. and narrowly just missed out on taking the top spot! These guys had a mix bag of smallies and largies hitting both main river and slop areas. At 40 total points for the season, they find themselves only 2 points behind Team Roboworm (42 points) in the Team of the Year race.

In 3rd place was the ever consistent team of Last Cast and Paul Hecht and Mark Wessel. These top sticks brought in 14.50 lbs and was just the first time they cashed a check this year. However, because of their consistency in upper tier finishes, these guys also find themselves only 2 points behind Team Roboworm in the Team of the Year standings too!

Getting the 4th place Big Bite Baits Better Luck Next Time tackle pack is PentaBass who weighed in 14.20 lbs. Team members Jared Simons and his sub Leah (Mike Dippel unable to fish) weighed the only “all smallie” limit today, with an uncommonly large 5.40 lb bruiser! This was the second largest bass caught for the day and also resulted in also winning the All-Terrain Tackle award.

Normally a 5.40 lb fish would get the biggest fish award but not for this day. The Bassassins wrestled in 5.80 lb largemouth slobasaurus from the backwaters to claim the Blackfish Gear Big Bass of the day! They got their fish on a Spro Bronzeye Frog 65 in Navy Seal colors. This was the largest bass caught so far in 2018 and ranks in the top 10 biggest bass in MN Bass Tour history. Along with the $100 side pot cash and Big Bass Wrestling Belt, Jim and Dan Krocak received their choice of Blackfish technical gear shirts courtesy of Blackfish! Check out all their innovative apparel at the Blackfish website and Facebook page! 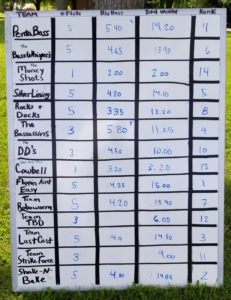 Thank you to our event sponsor SPRO Sports Professionals and our Platinum Sponsors of Quantum Fishing, Clam Outdoors, and Blackfish Gear for their support of the Minnesota Bass Tour!

Next Up: Tourney #5 Lake Minnetonka on August 12th

This is the last tournament before our TOC in September! Much of the MN Bass Tour field is still in the team of the year race so should be an exciting tournament on Tonka as we head into the end of the season! 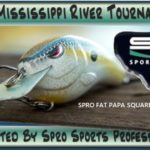 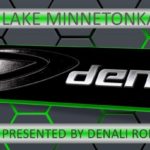